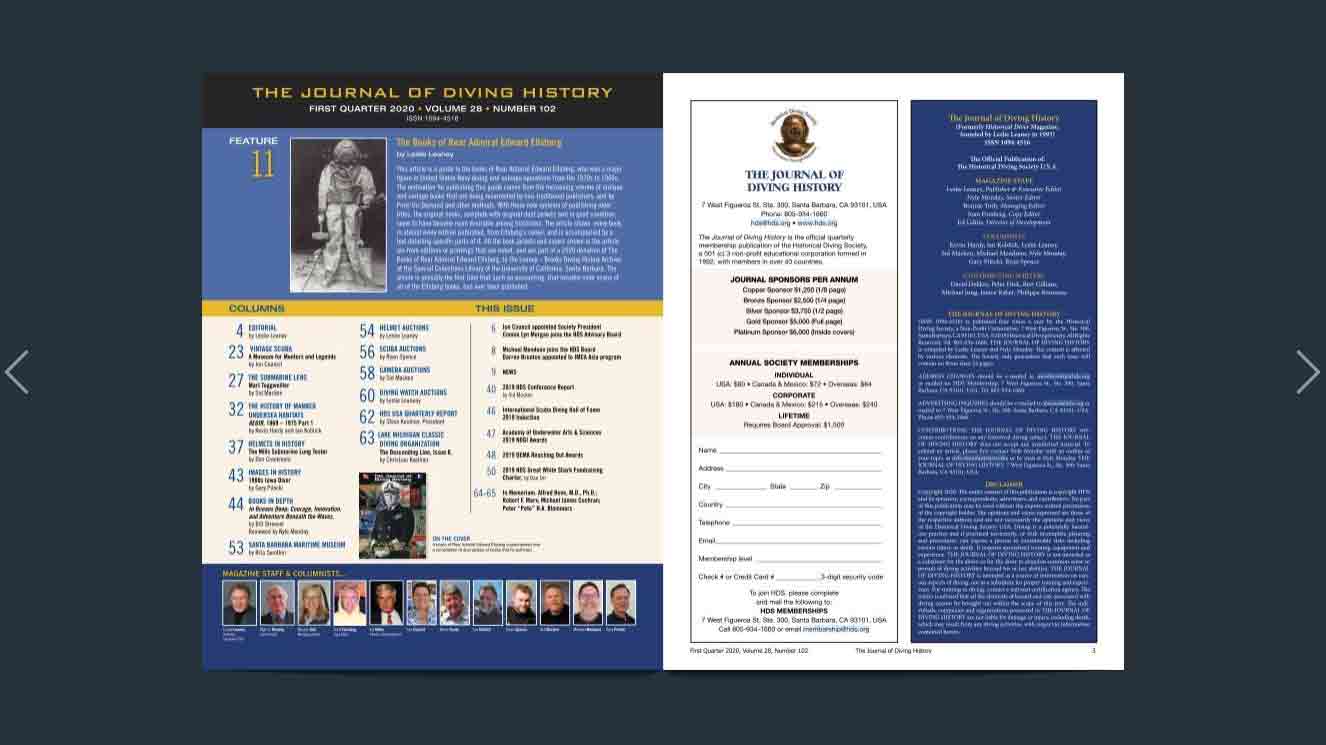 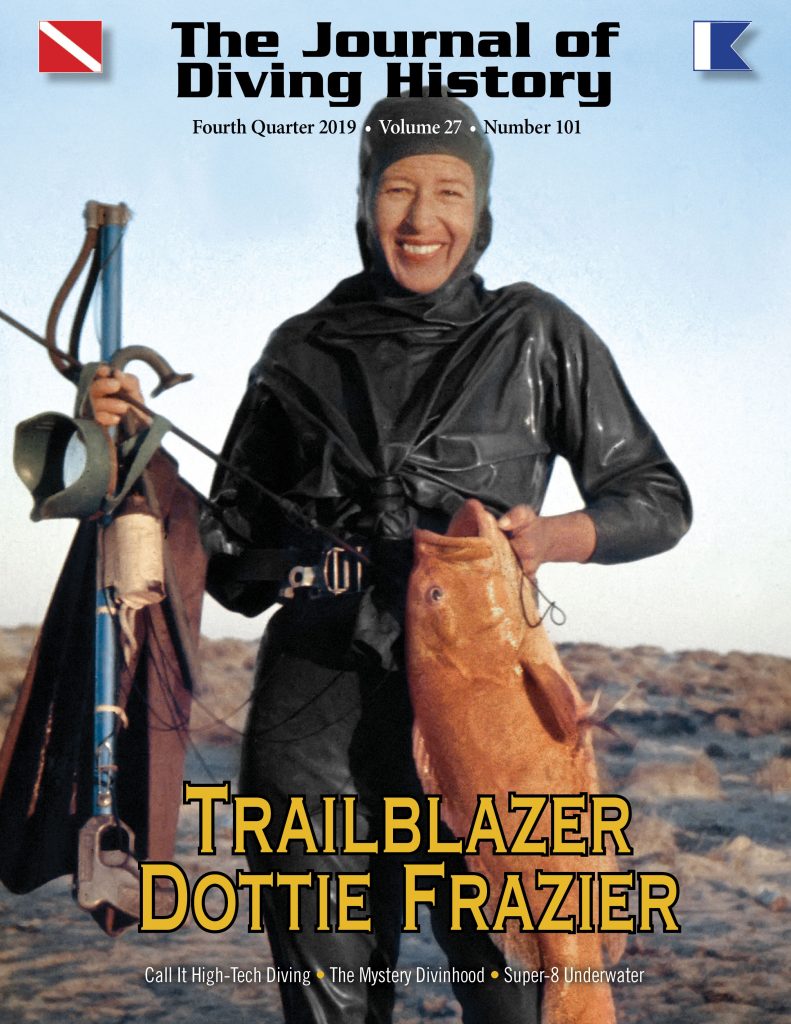 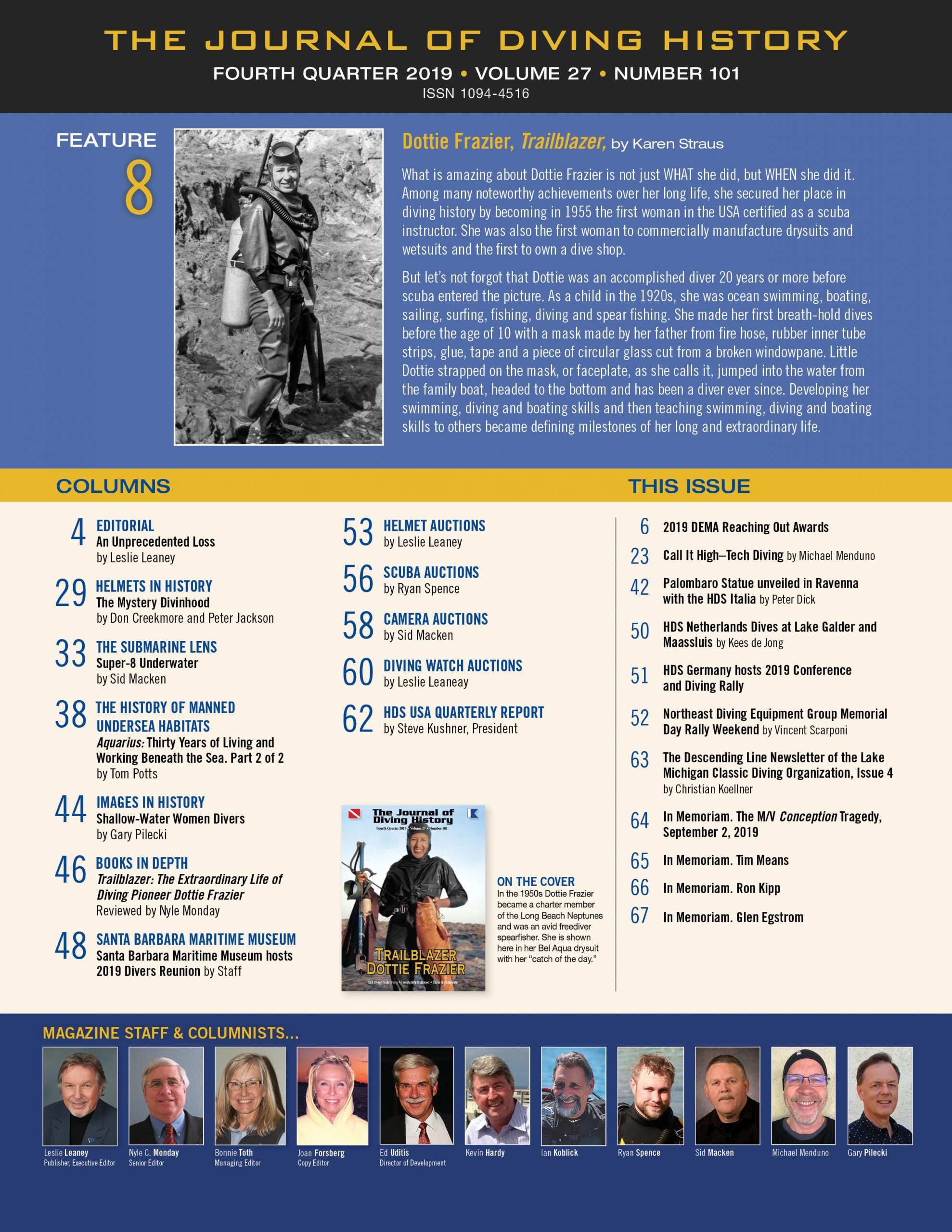 The Journal of DIving History is the official publication of the Historical Diving Society. 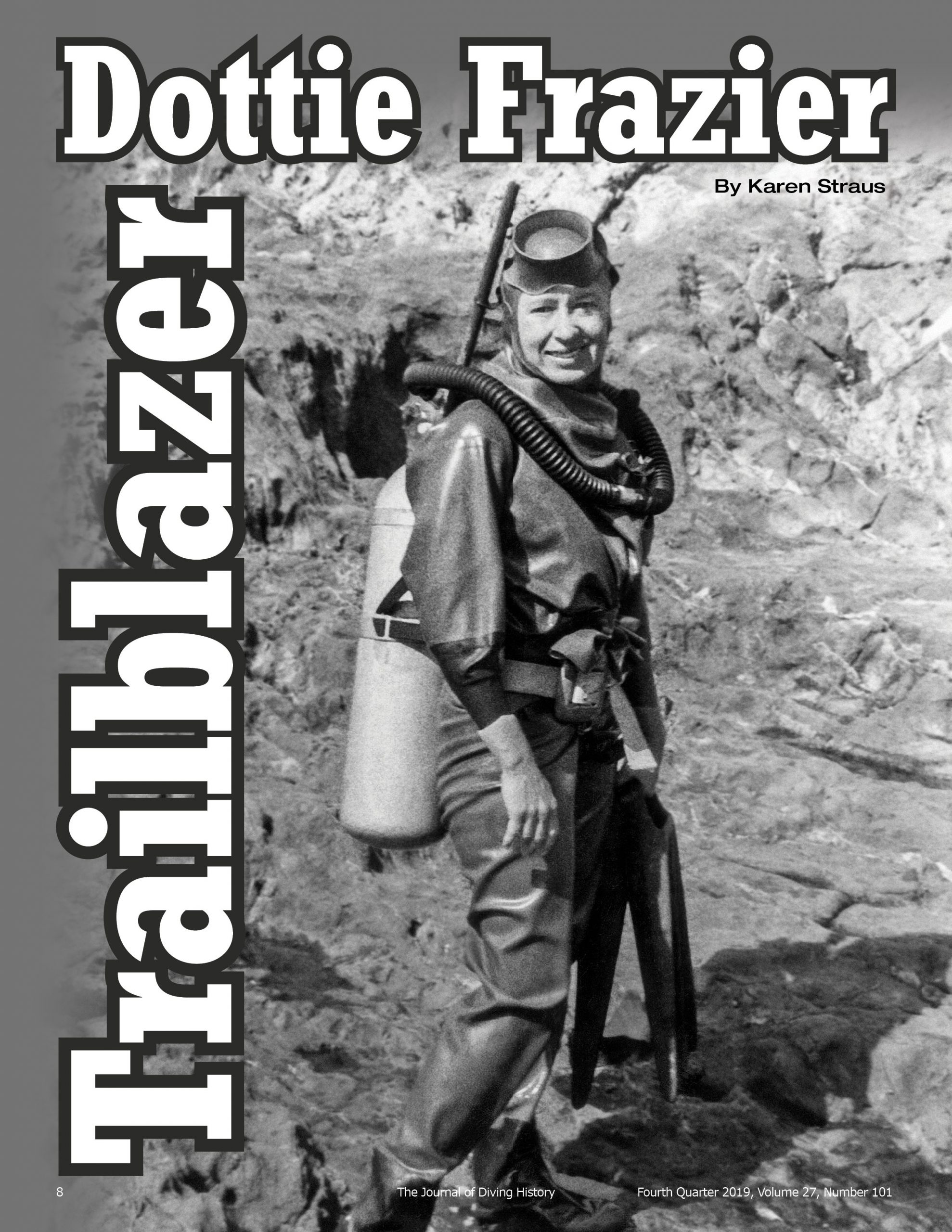 What is amazing about Dottie Frazier is not just WHAT she did, but WHEN she did it. Among many noteworthy achievements over her long life, she secured her place in diving history by becoming in 1955 the first woman certified as a scuba instructor. She was also the first woman to commercially manufacture drysuits and wetsuits and the first to own a dive shop.

But let’s not forgot that Dottie was an accomplished diver 20 years or more before scuba entered the picture. As a child in the 1920s, she was ocean swimming, boating, sailing, surfing, fishing, diving and spear fishing.

She made her first breath-hold dives before the age of 10 with a mask made by her father from fire hose, rubber inner tube strips, glue, tape and a piece of circular glass cut from a broken windowpane.

Little Dottie strapped on the mask, or faceplate, as she calls it, jumped into the water from the family boat, headed to the bottom and has been a diver ever since. Developing her swimming, diving and boating skills and then teaching swimming, diving and boating skills to others became defining milestones of her long and extraordinary life. (A physically spry and mentally sharp 97 at the time of publication.)

By 1940 Dottie was teaching skin diving classes at the YMCA and in 1948, swimming classes at the famed Long Beach Bath House on the Pike. She also helped support her growing family of sons (two in the 1940s with her first husband, Don Gath; two more in the 1950s with her second husband, Jake Frazier) by working as “one of the guys” on commercial fishing boats.

She started her career as a scuba instructor in 1955, eventually certifying more than 2,000 scuba divers, all while facing sexism and discrimination in a male-dominated sport and business. But that didn’t stop Dottie, all five feet and 110 pounds of her. In addition to manufacturing wetsuits and owning a dive shop, she was throughout the ‘50s, ‘60s and ‘70s a model and actress, a competitive spear fisher and a performer in arena water shows.

After retiring from her Penguin Dive Shop and Penguin Wetsuits in 1970, she married her third husband, Australian surfer-songwriter Cyril May, in 1973. They spent the next decade on adventures such as dredging for gold in the icy creeks of California’s Sierras and traveling to international diving destinations. When not on the road in their camping rig, complete with off-road motorcycles, the couple spent six months of each year surfing and fishing in San Blas, Nayarit, Mexico.

And Dottie was still going strong into the 2000s, competing in the 2011-2012 Senior Olympics in billiards and racquetball, earning four gold medals in each sport. For her 95th birthday she made a zipline flight at the YMCA’s Camp Oakes. As of summer 2019 she still uses her treadmill daily, just sold her beloved motorcycle and collaborated on a book about her life.

Dottie was born in the right place, Long Beach, California, in which to begin her life-long love affair with the ocean. She was also born at an advantageous time, when Long Beach was experiencing a boom, a result of vacationers coming for the young city’s golden sands, surf, sun and climate. The city would also become a fleet homeport for the navy and a busy commercial port, thanks to its proximity to Los Angeles.

When Dorothy “Dottie” Adell Reider was born on July 16, 1922, her father, Francis Reider and grandfather, W.H. Reider, were riding the real estate wave to prosperity, beginning with a beachside bathhouse. They then operated the original Long Beach Tent City to house the many tourists attracted to the growing city’s waterfront. In later years W. H. Reider & Son added a five-story apartment building, commercial and rental properties, and a seven-story, multiple-unit hotel and apartment building, The Mariner, and the Mariner Annex.

But young Dottie’s life took an unexpected turn when her parents divorced. Mrs. Reider took Dottie’s younger sister, one-year-old Jeanne, and three-year-old Dottie went with her father. This was to have a profound and lasting impact on Dottie’s life.

“Dad was expecting a boy, and instead he got two girls,” recalls Dottie, smiling wryly. “He then decided that he would take his oldest girl and teach her all the things that he had planned to teach to a son.

“From age six, dad taught me the fine art of boxing. If I had been the boy he wanted, instead of a girl, it would have been logical to know how to protect myself. He said that my gender made no difference and that I should learn the same things, for the same reasons. Little did I realize then that my father’s maritime and boxing training would in one way or another shape the rest of my life.”
Dottie’s first boat ride was at the age of three months on the family’s 21-foot sloop, the Dotadell. After the divorce, she started spending much more time on boats with her dad. “The Pacific was my playground. I always had my water wings on both in and out of the water. I managed to fall overboard at least once a day, but dad said I did it on purpose whenever he said, ‘No, you may not go in the water.’
“By age three I was swimming without the flotation, jumping off the boat, diving head first and able to climb up the swim ladder without help. I had become the son my dad didn’t have; being a girl was almost forgotten for many years.

“I spent the majority of the next few years with dad living on our new boat, Mariner, a 28-foot yawl, in the harbor of Long Beach, just off Terminal Island. When I was old enough, I went to school from the boat to a one-room schoolhouse with only a few kids about my age. On many weekends mother and my sister joined us on the boat.”

Dottie was about six years old and already comfortable swimming in the ocean when her dad accidentally dropped a coffeepot overboard while rinsing it at Catalina Island. Because he had a bad head cold, he asked his daughter to retrieve the coffeepot.

“I could see the pot in the crystal clear water just 15 feet below, recalls Dottie. “I was a good swimmer, could dive off the highest part of the boat, swim down the anchor line eight or 10 feet, do surface and porpoise dives, but 15 feet deep? No way.