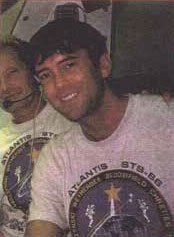 For a PR guy, Mark Ward’s Career has taken an unconventional path – and it suits him just fine. As a contractor for NASA, Ward has combined his interest in the space program with his love of diving (he’s a PADI Divemaster) to orchestrate the first televised sea-to-space communications link. The historic event took place when Mike Gernhardt spoke from the orbiting Endeavour to aquanauts Scott Carpenter and lan Koblick, who were stationed in an undersea habitat.

Based in Maitland, Florida, Ward represents a number of high-profile clients in underwater and space exploration, including Mercury astronaut and Sealab aquanaut Scott Carpenter, Sealab aquanaut Robert Barth, Skylab astronaut Edward Gibson, and oceanographer Andreas Rechnitzer, science director of the Trieste, a submersible that in 1960 descended to the deepest known point in the ocean.

Like many children growing up in the 1960s, Ward’s first exposure to the undersea world came from watching Jacques Cousteau on television. While he dreamed of becoming a scuba diver, he also grew fascinated with space exploration. “I had a thirst for exploring alien worlds,” he remembers, “but I figured space flight was a long shot, so I set my sights on scuba diving to discover what the oceans of this planet had to offer.”

Ward’s early influences have played a pivotal part in shaping the direction of his work. In 1994 he developed and promoted the Scott Carpenter Man In The Sea Program, an undersea educational experience inspired by the well-known astronaut and aquanaut, and in 1995 he coordinated a live interactive underwater satellite broadcast called SeaLink, which connected middle and high school students at an aquanaut undersea training center in Florida with students at museums in Washington and North Carolina. The same year, he coordinated SeaForum, a conference exploring the adaptability of humans to undersea living.

In 1997 NASA again contracted Ward, this time to coordinate an education and outreach program centred around the Scott Carpenter Space Analog Station, a small, portable underwater habitat. The program educated the public about the difficulties of – and similarities between living in sea and space.

When Ward isn’t rubbing elbows with some of this century’s most intrepid explorers, he’s likely talking a well-deserved dive vacation. But even then he’s up for a challenge, preferring to chart unusual territory.

“The most unique dive I’ve ever experienced was in Quebec’s frozen Lac McGregor,” he says, “playing upside-down ice hockey.”

Man in the Sea Program

Museums of the Deep: Diving is Thriving Around Ontario