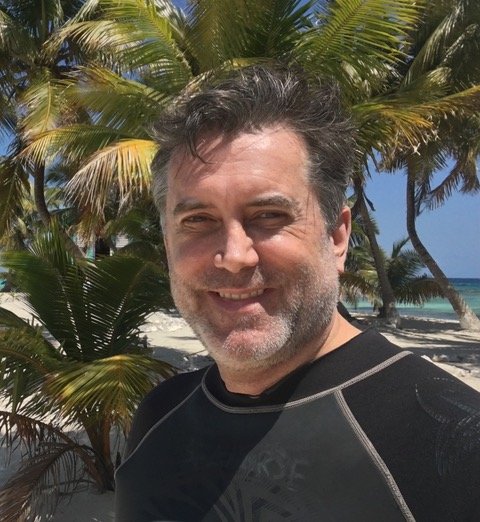 Mark’s love for ocean exploration was spawned by early TV shows like “Voyage to the Bottom of the Sea” and “The Undersea World of Jacques Cousteau”. Despite learning to dive in the cold quarries and lakes of eastern Canada he warmed to the sport and channeled his passion as a video producer, magazine writer and event promoter. For almost four decades, Mark has focused on promoting undersea ventures for public and private enterprises. In the process he has been fortunate to dive some of the world’s greatest sites and live in 4 different undersea labs for a combined 40+ nights.

Mark has been especially keen to promote the connection between sea and space, co-producing a live link between an undersea lab in Florida and the Space Shuttle Endeavour orbiting overhead. As a NOAA contractor in 2000 he initiated a partnership with NASA to train astronauts in the Aquarius Undersea Lab which continues to this day and for 18 years Mark coordinated twice annual meetings and dive trips for the Sea Space Symposium. Since 2012 Mark has lead dozens of expeditions for the research vessel Alucia and is now working on plans for her successor OceanXplorer operated by OceanX. Mark is delighted to join the HDS board in its quest to promote a greater appreciation for the history of diving.